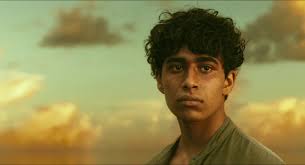 JBF concluded its look at magical realism in today's movies with "Life of Pi". Directed by Academy Award winner Ang Lee, it tells the tale of a young man who survives a disaster at sea and is hurtled into an epic journey of adventure and discovery. While cast away, he forms an unexpected connection with another survivor: a fearsome Bengal tiger. This was a novel that many believed could not be made into a film, according to The Guardian, "the story of an Indian boy on a literal and spiritual journey with a tiger named Richard Parker, a story open to many interpretations, had long been thought to be unfilmable. Other directors, including M Night Shyamalan and Alfonso Cuarón, had considered and rejected the complex story". Ang Lee himself expressed reservations in the same article "“Kid, water, big special effects, animals – and they have to be in a small boat on water. It seemed to be a filmmaker’s every nightmare,” he says now. “I thought it was difficult and challenging and I got geared up and decided 'I’ll be the one to do this’, but once I got into it I thought it was a dumb idea to have picked it up.”

Our group found this to be one of the best movies we've watched as a group and that it has set the group's bar for what a film using magical realism can accomplish. Whether one came away with the belief that his adventure had been allegorical or real, we felt that both versions were believably presented -- and that is Lee's great achivement with the film. We felt totally engaged by the young hero of the film, and that there was a genuine connection between he and the tiger -- and that they each came to realise that while it was based on survival, some understanding was achieved that normally would never happen -- and that this was a gift. We are all very glad to have met both Pi Patel and Richard Parker!